I had just finished giving a concert in a small Japanese city called Shizuoka. Some friends invited me to stay in their house for the night. They lived outside the city in a large, traditional-style Japanese farmhouse made of wood with paper walls. In one part of the house, their grandmother had been living with them. She had died one day before. The musicians I was traveling with were each given a choice which part of the house they would like to stay. Our host turned and offered me Oba-chan’s room (oba-chan is the Japanese word for grandmother) saying she said she thought I would have more space to rest there as long as I felt comfortable with the situation. So I graciously accepted her offer. Stepping through the door to Oba-chan’s room, I couldn’t help noticing the official certificate of death tacked over its entrance, having been placed there by the local Shinto priest. I assured my hosts I would be fine and we all said goodnight.

Alone in the room, I could sense the presence of death still hanging in the air. It was tangible, like a vibrating stillness I felt I was on sacred ground and bowed to the shrine in the corner. Lighting some incense sticks, I placed them carefully next to the buddha statue in the shrine. A small mirror had been placed at the shrine’s center.It is one of the Zen influences of Shintoism has absorbed, the significance being: whoever seeks God by looking in the shrine will see their own face in the mirror.

I lay awake a long time that night before finally drifting off into a deep, dreamless sleep. The next morning, I awoke feeling refreshed, and grateful to Oba-chan for the opportunity to have participated in the mystic experience of her death. Taking up a pen and paper, I wrote down the following poem in her honor and to say thank you.

Someone lights to burn
Fragrant sticks in the room
Where only yesterday I laid
Sick and dying.
Nothing much has changed, only
This is not my house
Anymore 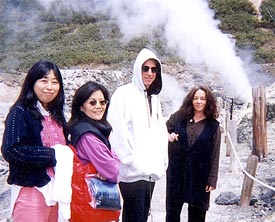