one sky music
From Musician To Meditation Maestro
March 31, 2000
from the Osho Times International, Volume 13, issue 3, 2000

Milarepa is best known throughout the international sannyas community as director of the Osho Institute of Music and Celebration. But moving right along with so many other changes within the Osho Commune these days, he recently accepted an invitation to run the three-day, monthly Meditation Intensive in March 2000. Rather than conducting the Intensive alone, Milarepa asked several fellow meditation leaders to join the program in order to “have as many flavors as possible in the weekend.”

“I wanted to enhance the meditations by making use of some people’s expertise in specialized areas,” he continued.

Milarepa also invited his many musician friends to provide live-music for some of the techniques. The younger participants found this particularly appealing. But the real break with convention was his idea to use recordings of Osho telling jokes. “I used them instead of quotes,” said Milarepa. “It took people by surprise and everyone seemed to agree: Having a good laugh was a great way to start and finish the meditations.”
Milarepa, accompanied by his international band One Sky will be leading meditation events all over the world this year. 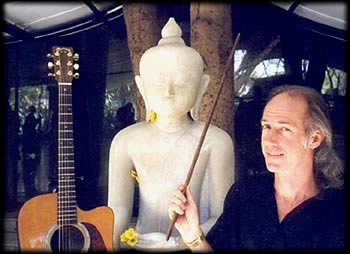